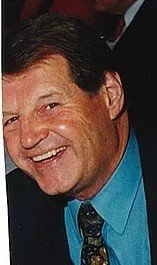 January 26th, 1939-May 17th, 2018 With deep sorrow, we announce that Wayne Winstone passed away with peace and dignity at University Hospital on May 17th, 2018 in his 79th year. He leaves behind his adored wife and best friend of 42 years, Betty Anne, daughter Kim (Wayne Horrill) of Whitby, On, son Joe (Maxine Quigg) of Wellesley Island, NY, son Monty Gibson of Burlington, On. Loved grandfather of Connor and Kennedy Quigg of Wellesley Island, NY. Dear brother of Elaine (Don Black) of Portage La Prarie, MB, Joan Andries, Don (Donna Winstone), Donna (Peter Sansbury) all of Winnipeg, MB. Wayne was predeceased by his parents Arthur and Grace, brother Vern (1947), sister Corinne Lafreniere (1999) all of Winnipeg, MB and his daughter Sherri Gibson (2003) of Burlington, On. Wayne will be greatly missed by many nieces, nephews, friends, neighbours, co-workers and former teammates of the Winnipeg Braves 1958-1959 Memorial Junior Hockey Champions. Cremation has taken place and a Celebration of Wayne’s (Winsk) life will be held at his home, 299 Everglade Cres, London, on Saturday, June 23rd from 2:00pm-4:00pm. Expressions of sympathy and donations may be made to the Heart and Stroke Foundation or the Palliative Care Unit, LHSC University Campus. Many thanks to the nurses and doctors who cared for Wayne during his acute and palliative journey. We appreciate all you did

Share Your Memory of
Charles
Upload Your Memory View All Memories
Be the first to upload a memory!
Share A Memory