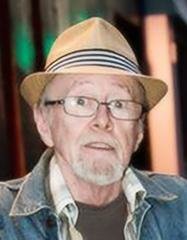 DEAVILLE: Unexpectedly at his home in London, Ontario on Sunday, September 20th, 2020. Wayne Deaville in his 70th year. Beloved father to Tanya (Michael) and Jason (Kim). Cherished son of the late Walter and Marjorie. Dear brother of Rita Denomme (and her late husband Remy), Brian (Elizabeth) and Raymond (Eadie). Proud grandfather to Miles Carter. Loving uncle to many nieces and nephews. Charging full-speed into this world on June 17th,1950, Wayne made a concerted effort to make every second count. At the impressionable age of 17, he traveled alone to England leaving Canada a clean-cut teen and returned home a handsome, hippie, rock ‘n roller. Wayne’s profound love for music was born over that summer of ’67 in England: bell bottoms, cowbell necklace and all! Wayne, a gifted welder, worked at GM in both London and Oshawa. He also left his mark in many cities, forging ornate railings and metalwork in buildings across Ontario. He was proud of his work, often revisiting these sites with his children. His passion for his work culminated in the opportunity to relocate to Sri Lanka, where Wayne lived and worked as a foreman, constructing villas on the coast of the Indian Ocean. He could be spotted on weekends bathing elephants and traveling the country. Sri Lanka was Wayne’s utopia. In retirement, Wayne was still as active as ever. Over the last several months, as his knees started to fail him, he gained a new-found freedom and independence with his mobility scooter, zipping around London visiting friends and family on a daily basis. He was living every day with a zest for life and a confidence that was infectious. Wayne was a one-of-a-kind soul. The least judgemental, forgiving, caring, stress-free person one could know. He had no enemies, no drama, no hang-ups. A rare thing. He loved his family and friends deeply and unconditionally. Wherever you are, Wayne, keep on rockin’ in the free world! Donations may be made to the Alzheimer’s Society of London and Middlesex https://alzheimerlondon.ca/ , a cause that meant a great deal to Wayne. A celebration of Wayne’s life will be announced at a later date, when restrictions on public gatherings have eased.

Share Your Memory of
Wayne
Upload Your Memory View All Memories
Be the first to upload a memory!
Share A Memory